Come take a journey with me for a moment looking through your mind’s eye and picture yourself as the central character in one of the greatest adventures you will ever participate in. The sun has been up only a short time, the air is still and there is a quietness around you that is so loud you have to stop and listen to it. You take a deep breath and inhale the fresh, crisp morning air. You notice movement and see a small bird flying low over the open field you are in, seemingly begging you to come join it. 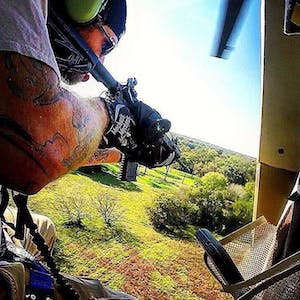 You check your gunners harness once more and tighten the straps and buckles just a little more. You pick up your weapon and feel the heft… you cycle the action again and feel its smoothness…you have checked it four times already, but you check it once more to be sure it’s ready for its deadly mission. You raise your head and look out a smile appears.

You admire the metal beast sitting on the tarmac in front of you that are about to become a part of. Its shark nose and sleek lines are just like the ones flown in combat by scout pilots in Vietnam and flown on countless early morning reconnaissance missions along the East German border during the Cold War. It is a part of history and you can almost sense that it’s beckoning to you to mount up and take a ride with it.

You walk out and step up into the back cabin, sit down and connect your carabiners to the safety hardware that will keep you securely attached during the low level maneuvering. Your pilot breathes life into the machine as he has done countless times in the past, carefully checking every dial and gauge and listening to the machine to make sure your steed is ready for the task at hand. You smell the exhaust and feel the vibration as the bird comes to life, and your anticipation builds as the adrenaline starts to flow. The aircraft lifts off effortlessly, anxious to fly, and you note the skilled pilot’s expert handling…he is truly a master of the art and one with the aircraft. You feel the nose rotate forward and suddenly you’re skimming across the ground at high speed, mere feet about the terrain, searching for targets, weapon loaded and ready. The adrenaline rush you are feeling is one you’ll never forget.

There! Several hogs suddenly appear running at full speed, surprised by the metal bird. You quickly raise your weapon and aim. The pilot has expertly put you in a perfect firing position and you rapidly pull the trigger…three hogs go down. The adrenaline is in full flow now and you cannot stop smiling.

The pilot continues to expertly maneuver the aircraft to put you into position to shoot at another group of hogs that has suddenly appeared. You aim and fire and continue your eradication mission. Even after you land and the machine quietly winds down, you cannot stop smiling and you pinch yourself. Did that really just happen? Hog hunting from a helicopter is probably the biggest thrill you’ll ever have in your life!

However, not all helicopter hog hunting operations are created equal. There are multiple operations claiming many different things, but what truly separates one from the other? Mainly people, but also equipment, skillsets and experience. But can there really be that much difference? You be the judge.

Let’s start with people. How about flying on missions with American military trained helicopter veterans of multiple wars and multiple combat operations that have honed their skills flying some of the most incredible aircraft ever built, with some of the most elite operators on earth, under some of the toughest flying conditions on the planet? Or would you rather fly with the other guys who just have some time in the air?

Next, equipment. How about flying in turbine engine machines that are meticulously maintained to the highest standards in the US and using the best safety harnesses manufactured anywhere in the world? Or would you rather fly in an aircraft that has had “adequate” maintenance and strap on a 30 year old safety harnesses picked up at an Army/Navy store?

How about using weapons that are meticulously maintained and purpose built precisely for the type of hunting you will be doing, and given ground training on how to effectively use them? Or just being told it’s up to you to provide something to shoot?

Finally, how about joining a crew of military veterans for a day and being a part of something you’ll be telling your grandchildren about some day? Or just being treated like another customer that simply bought a ticket and is standing in line for their turn on the roller coaster ride? I’ll leave it up to you to decide which operation you would rather be a part of.

G&T Outfitters and Utility Aviation, Inc. are both owned and professionally operated by service disabled veterans that have years of experience in making sure you have the hunt of a lifetime. Our customer service is based upon one basic premise – exceeding your expectations and making sure that you experience one of the greatest thrills you will ever have: hunting from a helicopter…safely and professionally. We have never cut corners on safety, and we never will. While we cannot guarantee you will shoot a feral hog (these are after all wild animals living on a free range) we will guarantee you will have one of the best experiences of your life.

Come fly with us and let us prove to you why we are the very best in the business. You might even get to hear a couple of stories about some things that will most likely never be in books or movies! Book your hunt today! 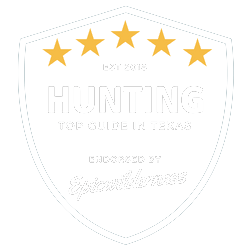